David is a film archivist. As he watches an old film he realizes that, in 1902, the house he lives in with Alice, to whom he is happily married (or thinks he is), was the scene of a bloody crime, which was never solved. He discovers that his wife has been cheating on him and when she suddenly disappears, he becomes the prime suspect of the police. And yet David is sure that his wife’s disappearance has supernatural causes and has something to do with the mysterious presence that lives in his house… 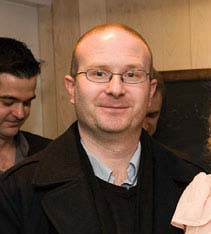 Ivan Kavanagh (Ireland) wrote and directed the short Bandage-Man (2006), and then debuted in feature films in 2007 with The Solution, which was followed by Tin Can Man (2007), Our Wonderful Home (2008) and The Fading Light (2009), which were successfully presented at various international festivals (London, Melbourne, Sydney, Pusan). He has also worked as film editor, collaborating on the surreal thriller The Looking Glass (2011) by Colin Downey.

“I’ve always felt that the horror genre has often been unfairly dismissed and neglected. For me, horror films, at their very best, have always (from the silent era to the present) allowed filmmakers the possibility of pushing the boundaries of cinema (both in sound and in picture) and to experiment. This is something I have definitely taken advantage of in The Canal, and I hope my love of the genre, and its endless possibilities, transfers to the audience. And scares the hell out of them too!”