Joana Hadjithomas met the artist and poet Etel Adnan at the end of the 1990s. They quickly grew close, bound by links to a city they had never been to: Smyrna formerly, Izmir today. Joana’s paternal Greek family were forced into exile from Smyrna by the Turkish armies after the end of the Ottoman Empire. Etel’s Greek mother, was born in Smyrna, married to a Syrian officer of the Ottoman Army and exiled to Lebanon after the fall of the empire. Etel and Joana lived in an imaginary Smyrna, today Izmir, without ever setting foot there. At present, both find themselves engaged in questions around the transmission of history, and interrogate their attachment to objects, places, the constructions of imaginaries and mythologies without images. Their personal experiences, their stories serve as a background to the region’s changes after the fall of the Ottoman Empire, the evolution of the borders questioning the notion of identity and belonging. 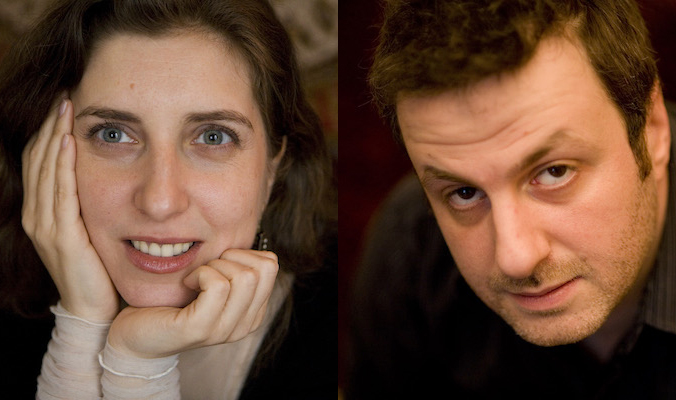 (Beirut, Lebanon, 1969) directed films presented and awarded at various international film festivals. Their works have been exhibited in galleries and museums. With the latest feature Memory Box (2021) they participated in competition at the Berlinale, while with their debut film A Perfect Day (2005) they won the Fipresci award in Locarno and with the subsequent Je veux voir (2008) they participated at the Certain Regard section in Cannes. Their documentary The Lebanese Rocket Society: The Strange Tale of The Lebanese Space Race (2012) won first prize at the Doha Tribeca Festival. Several retrospectives of their films have been presented in institutions such as Cinematek in Brussels, the Lincoln Center, the MoMA and the Flaherty Seminar in New York, the Tate Modern in London, Paris Cinéma, the Institut Français and the Mori Art Museum in Tokyo, the Harvard Film Archive, the Locarno, Nyon and Gijon festivals, while in 2017 their installation On Unconformities was awarded the prestigious Marcel Duchamp Prize. Their artworks are part of major private and public collections including British Museum, Center Pompidou, Fond national d'art contemporain, MCA Chicago, Solomon R. Guggenheim and Victoria & Albert Museum in London. Hadjithomas and Joreige are the authors of numerous publications namely The Rumors of The World: Rethinking Trust in the Age of the Internet (2015) e Two Suns in a Sunset (2016). They are often invited as university lecturers in Lebanon and Europe. Both artists are co-founders of the production company Abbout Productions with Georges Schoucair, as well as executive members of Metropolis Art Cinema and the Cinemathèque in Beirut.